1-2-3: How racist trolling wins votes from people who don't want to be racist 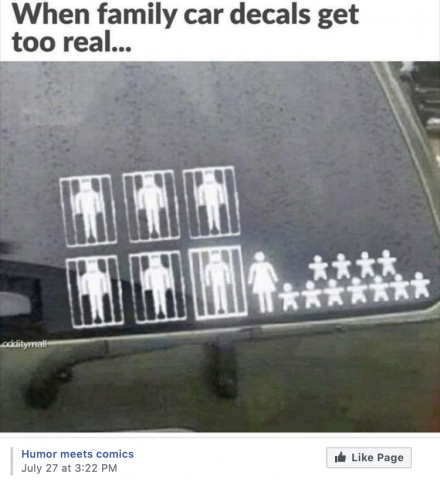 I watched good folks start to tear into each other when this window decal made its way to a political facebook group.

I'm guessing: this image is seen as wildly racist to some, and a silly joke about lousy ex-boyfriends to others.

And there is a big danger: when people don't think they're sharing something racist, and then get accused of it, they tend to feel pushed out, not called in. This is creating, over and over, a feeling of rejection among a large part of the country.

This provocation is done very much on purpose:

1) Politically active people (provocateurs) are aiming to get the target audience — especially non-politicized voters — to blow dog whistles. The tactic is strongest when the people blowing the dog whistle don't realize they're doing it, don't hear the dog whistles or intend any harm. An example is getting people saying the phrase "All Lives Matter" — which free of any context, just those three words, sounds pure and innocent and idealistic.

(2) Then the target audience face intense anger from progressives.

(3) Then the accidental-dog-whistlers get angry at the people who yelled at them. Now they are politicized.

That is 2016. That is the "deplorables" thing — millions of people were really angry about being called racist and not knowing what the accusation was about. Fox and similar media worked hard to worsen the confusion, very much on purpose taking Hillary Clinton's quote out of context. Progressives didn't work hard to welcome back the people who felt confused and offended.

How do we build solidarity among decent people, when we face this tactic? (I have no idea about the originators of the sticker — I feel sure that if a million people see this sticker, some are going to see a racial overlay and some simply are not) but the conflicts here are the same as the broader pattern, and we certainly see it happening on purpose often enough.

I feel scared to say that as a community we don't seem to have developed ways to invite each other in, even among allies who intend to be anti-racist.

Could your community discuss racist implications of that window decal in a way that people reading the discussion would feel like "I want to join those people, I feel inspired by those people"? How would that work?

Exercise: Imagine you went on a year long news fast, and came back to hear people saying "All Lives Matter." That sounds sweet and gentle and heartfull, right? How would you want your community to bring you up to speed?

PS: One group that is inspired to be that kind of community, working on strategies to reach across partisan divides and generate understanding, to learn why we misinterpret each other, is: SMART Politics. A small group from Cognitive Politics and SMART Politics may soon start creating "Rapid Responses" to current issues that combine the best communication techniques with social media — speak up if you'd like to volunteer and co-create.