The Choices When Framing: Your Values or Theirs? (1)

What's the best way to frame political arguments? Some argue that we should tell stories that express our own values strongly — preferably with many voices repeating and reinforcing the same story; this is the approach in George Lakoff's Don't Think of an Elephant. At the opposite end of the spectrum, we hear advice as in Jonathan Haidt's The Righteous Mind (and Moral Foundations Theory) to spend more time listening to conservative opposition and coming to understand their values — more empathy, more compassion. Progressives often argue about where on this spectrum we are most effective. What does the Democratic leadership choose?

Even When It Doesn't Save Money: Don’t use other people’s values and logic, use your own by Nathan J. Robinson is a great place to start. 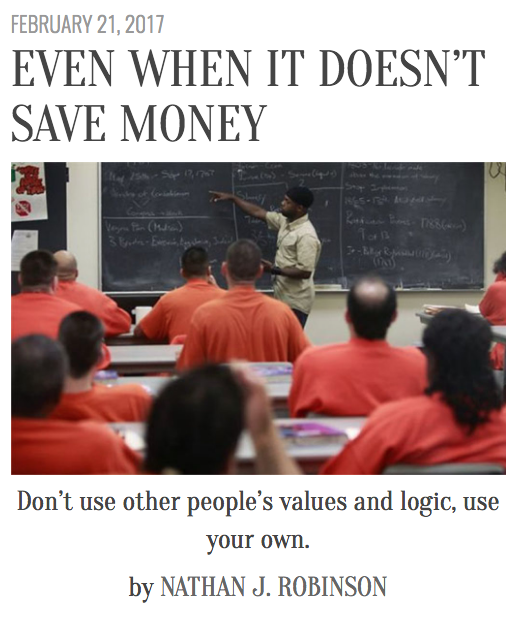 Robinson reviews progressive outreach on issues from the death penalty to drug testing welfare recipients. For each issue liberals have focused on cost-savings as a value-neutral way to push our policies without expressing own own liberal values:

"Each of these arguments has something in common: they support a left-wing policy position, without requiring a left-wing set of moral preferences."

This breaks the spectrum we set up just a moment ago. Saying that the death penalty is expensive does not involve listening to conservatives and understanding their values — we have not slowed down and explored their moral foundations. And we have not expressed our real values.

Democrats have been doing this for a long time now. Robinson finds example after example of triangulation, seeking neutral values between left and right, neither expressing our own values fully nor understanding and engaging our opponents deeper values.

Many Democrats see a conflict between echoing your own story with clarity and sometimes even anger vs. having empathy and taking time to listen on the other. But it's a false conflict, there is time to do both. The problem is doing neither. When it is your turn to listen, listen well, assume that voters (if not always politicians) are decent people and hear their values and their needs — leave people feeling like you are on their side even if you disagree. When it is your time to talk, don't turn down your volume. Don't pretend that your policies are just technically better, a way to save a few dollars, when you really are calling for treating human life with dignity — if you disagree, disagree, share your heart.

Since Reagan, Republicans have been able to accuse Democrats of being "card-carrying liberals" and gotten Democratic politicians to squirm instead of own it. You can not triangulate on values and leadership and stay popular over the long run: our nation is pretty strongly against Socialism, and in the polls right now arguably* the number one politician in the country often — proudly — associates himself with that word. The data from the polls and the last election is clear: you can have your idealism and be popular too. You can also treat voters who disagree with dignity and listen to them, without holding back your real feelings. If the party refuses to give stage time primarily to people who believe, that means the party is gutless, and will come across as gutless, and lose.

* I haven't found a good matchup of poll numbers. Sanders and Obama both seem to be doing quite well. Polls for Obama at 55% and Sanders, more recently, at 61%, but Obama was not in the same poll.

What issues have progressives mostly triangulated on? On which do they speak their values? Do you know of counter-examples, where triangulation has moved the issue forward?