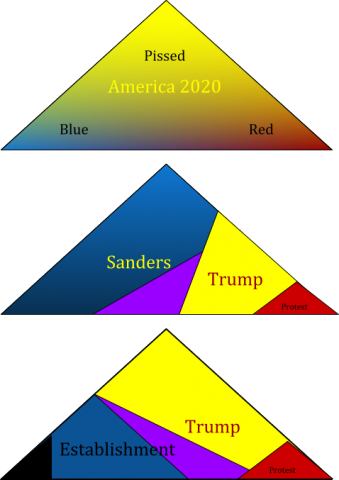 The left-vs-right political spectrum has been an informative model to understand politics for more than a century, so we're still trying to use it. But it is mostly dated, at least for anyone who might swing. It's not that swing or undecided voters are between left and right: they are not using this model anymore. Left-vs-right is of fading importance, and nothing clear is taking it's place.

Huge numbers of Americans are pissed. They'll vote for an anti-establishment candidate on the left end or the fascist end of the spectrum without blinking. All the politically active people are scratching their head: in our world, those are opposites on the all-important left-right spectrum. But the new "center" has no left and right: it's not half-way between the two, it just doesn't care.