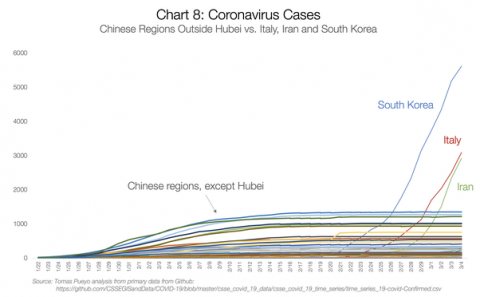 As I write this, the Bay Area — oh, faster than I edit, California too — is in "shelter in place" while Governor Cuomo in New York is fighting back as New York City aims to do the same.

Epidemiologists say that if you don't stop the virus, it will be a disaster — for Americans, not doing anything means overflowing hospitals and casualty rates perhaps as high as all of World War II. Every nation that lets this get out of control has the same response: they stubbornly don't lock down as soon as science says they should, they see people dying, and then lock down anyway, generally the more stalling the worse the lockdown. No country, no matter how stubbornly anti-science on day one, decide they want to send their grandparents to an extra war.

Italy is a disaster. We are on the edge of disaster — what do the numbers say? Are we locking down in time to prevent the hospitals from overflowing?

Since testing is so variable, my intuition of a good measure is to look at the number of deaths when a lockdown happens. To put it super simply, if one city locks down after ten times as many people are dead, it's likely that their end number, after the current infections run their course, will be around ten times as many. Exponential growth means this happens in very short timescales.

These numbers are gathered from newspaper articles and google searches and need confirmation if you want more than ballpark estimates:

It started in Wuhan, 11 million population: On January 10 they had their first death, two weeks later on January 23 they had 25 deaths and locked down.

The US, as I write

My prediction, since I believe it's good to go out on a limb where you might be wrong, is that California will be much better off that New York and Washington, who are starting to pass the point where hospitals can handle things well. The US is not Italy, yet, if they get serious. Californians looking at the news from Italy, I both hope and expect, we can worry less, we're taking action much sooner: we get to deal with cabin fever instead of overflowing hospitals.

Doing it wrong: Look, one more time, at the chart at the beginning of this article. It is not too harsh to say that if you live outside Wuhan where this first exploded and surprised everyone, your nation had a chance to really fight and fight the infections down. Or wait till your cases start shooting up exponentially, if you prefer, and lock down all the same afterwards. Singapore, Thailand, Vietnam, Taiwan: not doing it wrong. Italy, Spain, USA: you had options. Too many nations are making excuses for politicians who could have asked scientists at any time what needed to be done.

This is a blog about politics and changing minds. I've written my predictions. If I'm way wrong, hopefully I'll notice. I think this is a great time to do active listening that aims to get people to say what they think will happen. Have them look at their assumptions, and learn about other countries. Do this without arguing, just be curious. There are no elections between now and when we'll be looking back at the first phase of this virus, so don't focus on the politics, focus on getting people to notice their assumptions.

Politics: We're all the same. Imagine a very long train racing towards a cliff with you nation's grandparents and a lot of younger folks too. We all pull the brakes. Some nations pull the brakes before the cars start zooming over the cliff, some sit and watch first a few cars fall first.

People vary in their response and their willingness to listen to experts. Some listen early; some want the government to butt out. But once the doctors can all see that the hospitals will soon overflow with wartime type casualties, everyone (except Iran's right-wing religious government) does what the epidemiologists tell them to do. In the end, once more people are regularly dying and doubling every few days, we all do shelter in place or lockdown anyway. The only exceptions are countries like Taiwan that have high compliance with detailed instructions and get started so early that it never gets loose in the population. After China's example, countries that trust science and trust experts and follow instructions are not locked in their houses; countries that love freedom and don't listen to government instructions, like Italy, wind up with police giving them fines if they step outside. We'll see if this continues to play out. I'd bet a dollar (not bet my life savings) that some red states wait, panic, and wind up with more draconian measures than California.

"Freedom" and populism generally start off opposed to intrusive "experts" and government intervention. The freedom impulse rings shallow to me: not looking at science until it bites them in the ass does not really help freedom. I will predict that early adapters of government intrusion following expert opinion ultimately have less draconian lockdowns. The states and countries that hold off from expert advice on lockdowns the longest will see more deaths AND at some point the pain will be too much and they will lock down as much or more than proactive states, somewhat ameliorated by rural states needing to do much less and hot states needing to do a little less.

California will not do as badly as Italy: Trump has been awol, getting us to this point (which we did not need to reach for a long time) but the governors are not all awol, and so far Newsom stepping in where Trump stepped out is a lot better than what happened in Italy. Californians, please follow the instructions, but also don't panic.
The longer they hold out, the more die first, to no benefit.

If you write down the ways that the Chinese government covered up coronavirus for how long based on impressions from US news media, and then go learn more, you'll find out that you were lied to and the Chinese response had a higher rate of heroism and less bullshit and hiding than Western media admit, and less than we have had here, and much of the difference ascribed to cultural differences could also be ascribed to China listening to scientists and the West using magical thinking. It's even worse with Taiwan — they've done a great job, as a democracy, and we should be learning from and emulating them.

Fake prediction: Half a million deaths

Fake prediction: If government doesn't take this seriously, America would face somewhere up to half a million deaths — people would freak out and start washing their hands and self-isolate after 10,000 or 100,000 and slow it down even without the government. It would look like a war zone. Real prediction: even very libertarian red states will shut down, I hope, but maybe not till one or two of them have casualty rates comparable to all of China.

One thing I noticed, on a very small sample set of countries I was paying attention to, they either shut down borders OR wore masks in large numbers but flights to China were still allowed. Want to guess which have 100 cases and which have 10,000 after starting at the same level?

Me either. Are your friends ignoring the shelter-in-place? This article mentions that Italians did not honor it well until everything blew up, and then they locked down hard. If you want to be able to go on a walk in a park without police ticketing you, you need neighbors who honor the social isolation.