Do you live in a liberal enclave, and are heading home to see relatives who supported Trump? Feeling furious while reading advice not to shame people? 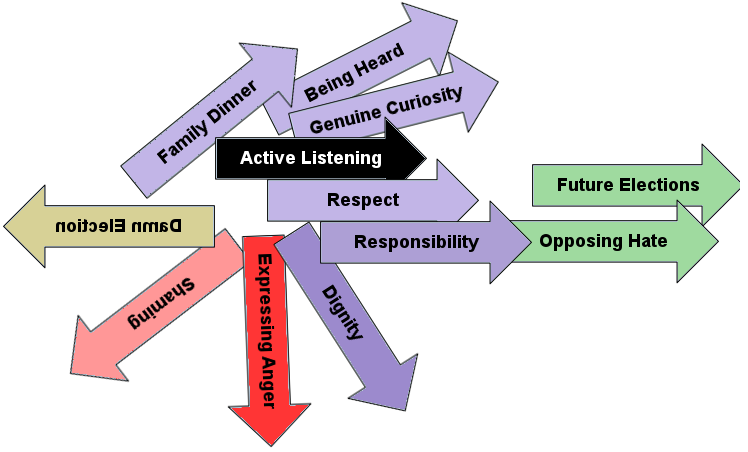 There is a lot of advice out there —this blog jumps in with a back-and-forth weaving of communication techniques, politics, and your hopes for connection and sanity at your Thanksgiving dinner table. Recommendations for more focused resources are interspersed; if you have a long flight home, take a copy of Cognitive Politics: a Communications Workbook for Progressives — available free as a PDF until Thanksgiving.

First Step: What are Your Goals

Before Getting Home: An Exercise

If you’re pissed and angry and feel betrayed by people who voted for Trump but hope to accomplish more than just fighting, a great place to start is imagining a conversation where you get out your anger. Write it down … and then be careful about saying any those things. This doesn’t mean that only gentle conversations make sense, but focus your challenge: unless you are actually sitting down to dinner with Trump himself, blaming and shaming voters with limited choices for everything wrong with Trump isn’t fair. But asking them to take some responsibility for the consequences of their vote may be fair.

Gathering: Start with Questions and Respect

Active listening is often the key tool to a good Thanksgiving conversation. If you want to be heard, start by listening. Get to the point where you can describe the other person’s values back in a way that they feel heard.
Find out what they want, what they care about. Make sure that they, and any listeners, know that you started out respectful.
One of the techniques with the best track record for improving conversations with people who are reasonably respectful but are full of anger based on Fox-news talking points: give them a respectful ear and encourage them to keep explaining until they talk right past the Fox talking-points without your guidance.
Another technique is “tit-for-tat” listening. Seek out everything they believe that you can agree with, and make it clear you agree. People across the political spectrum believe in fairness, if you switch from scoring points off the other person (a metaphor that means you are on opposing teams) to seeking agreement. It may take a long time to turn down the heat in politics, but try to move the conversation from scoring points off each other to seeking small agreements.
If you ultimately decide that dignity or other people listening to your conversation requires turning up the heat, these are still good places to start.

Stay Connected: When Do You Want to Take Things Personally?

Much of the advice on the web (example: Livingroom Conversations) is how to have a good conversation with people willing to have a good conversation with you. I’m jealous if this is your cross-partisan family, reality is often more difficult.
Political conversations go particularly bad when we get personal about the wrong parts. We short-circuit a candidate’s views or corruption with the person sitting in front of us, when our friends and family are not actually the corrupt person or party. We also short-circuit blame in the other direction: if you are talking to someone who is cutting you off, avoid deciding that “all conservatives/liberals are rude” and stay in the room, feel angry toward them and not their group.

I’m ready to have disagreements about politics and still respect you. But right now in this conversation at the Thanksgiving table, I have been trying hard to give you a chance to talk and to listen to you, while you have been interrupting me. I feel [stressed, sad, disconnected…]

How are you feeling?

Sad or afraid might be better leverage points than anger. If you’re feeling angry at people at the dinner table, be careful that you know what you are angry about. There are reasons to feel angry. It’s probably better to say it rather than seethe.

If you feel angry, how would you express anger to someone you respect? How can they make it right?
Don’t be vaguely nice at Thanksgiving, nor vaguely rude. A great example and contrast is when Pence went to watch Hamilton along with his family: he was (his family was) boo’d and also given a challenging but respectful speech. Imagine Pence’s family hearing only the speech, or hearing it with the boo’s — which one is more powerful?
Boos indicate disrespect of a personal sort, they are about shame: the person being boo’d (and anyone who voted for him) is not being asked to change, just told that we think they suck. The Hamilton speech was a challenge that came from a place of respecting the other person enough to say exactly what you are feeling and what you want. Anger and respect can go together.
This post started by recommending that you write down a conversation where you get out your anger. What are you most angry about? Can you narrow it down? Can you find one specific example?
Have you felt attacked?

You called me unpatriotic for opposing the Iraq war, and then voted for someone who says he also thought the invasion was a terrible mistake (though he didn’t take the personal risks to stand against the war before it started). You never apologized for calling me unpatriotic. Can you talk about that?
What would it take for you to respect the people you are eating dinner with?

A pig is as intelligent as a dog.

There, you’ve heard the fact. Are you vegan now, or at least done eating pork? Why not? We need to create stories that help facts make sense or they’ll get lost — and we can’t use us-vs-them stories. Listing all the facts that favor your opinion and oppose theirs creates a metaphor that we are on opposing teams— or a story of lawyers, of opposing counsel, and you can never convince opposing counsel. How can you weave the facts that are important to you back to values, ideally shared values? Bring in the facts that are important to you in unexpected ways that break the old stories.

This makes sense to me. If you are going to go for expressing power — that we can attack Trump and his policy, that this isn’t something we should just do but should also talk about at Thanksgiving—it’s good to keep focused on the fairness, to ask questions. I do think that some of the disfunction in Washington happens when Democrats fail to create consequences for Republican abuses. But, but as far as communication practices are concerned, you probably can’t do anything with this technique but squabble with your relatives, no matter how right you are. If you want to undermine the Trump presidency, get to work, don’t talk about it with conservatives at Thanksgiving. If you’re going to use power, use it—the young left has developed a growing habit of weak protests and pointless threats that we would be well to leave behind. Nonviolent communication techniques are what have worked to move justice forward in past struggles.

What are you asking for?

Trump won. That’s done. What’s next? Do you want your relatives who claim not be racist to be ready, if they see an immigrant or Muslim or black person being harassed, to not turn away? To talk to their kids and emphasize that we’re all in this together, and they should stand up for other kids who might be bullied? To post on social media to their conservative circle that all Americans should stand up if they see discrimination or harassment, to place their voice in their circle against something specific? To talk to their kids about consent?
Maybe we’re going to go fascist after this election, or maybe this is the infection that helps America finally build an immune response to day-to-day racism that the Civil Rights movement succeeded only at covering up. Maybe in four years our culture will shift, so that everyone knows that not being racist means standing up to racism when you encounter it, not just seeing it as the targeted culture’s problem. Maybe these four years we’ll undo the bystander effect that dominates racism and sexism. How do we get there? Check out: Showing up for Racial Justice. It’s something to work for if you can’t convince people to change votes, if your back-to-early-November time machine is broken.

You can’t easily ask people to regret or take back their vote. You can ask them to watch a video, to think about a topic. Perhaps react to police violence aimed at defenders of Standing Rock.

What would happen if you said something like this — both for the main person you talk to, and for other listeners, exploring how you and they connect:

Today, conservative America is asking for relief from competition with unfair labor practices in China. I first encountered this in my hippy coop, those were the first places to care that products were union-made or at least not from the most abusive places. I opposed the Iraq war—and was called unpatriotic for it—and now your candidate says it was a huge mistake. This country perhaps failed in the primaries, one candidate who thinks it’s ok to take bank’s money and keep speeches secret, one candidate who brags of sexual assault. So why don’t we treat each other like we’re on the same side as a starting point, instead of bringing the failings of politicians to the Thanksgiving table?

If Trump doesn’t work out, at the next election, can we stop separating into factions based on social issues, and seek out politicians with integrity rather than looking at their style? Can we all get engaged, on both sides, in making sure the primaries give us better candidates?

Seek “foot in the door” types of agreement. Don’t ask people to dismiss their entire worldview at dinner. Find something they can agree on, perhaps something that will cause them to notice things they haven’t noticed in the past.
If someone is harassing a woman wearing a hijab, will you say something? Can you be ready to stand up to racist talk among your friends? If you encounter “locker-room talk” about assaulting women, will you stop your friends and talk it out?
America should honor the treaty — that is a contract, that is our word — at Standing Rock. There is no wiggle room in this. We gave our word, it’s there in writing. Ask: Do you think we should honor our contract? Are you willing to write your politicians? Why, why not? I want to hear your reasons.

Don’t let politics define your values; let your values define your politics. Thanksgiving is a powerful holiday for this: we gather around a meal that is usually created mostly by people who earn little or no money for that work. It doesn’t take Steve Jobs’ genius to help us farm, transport and prepare a meal. When possible raise consciousness about the values that underly your politics without bringing up politics: thank all the people involved in creating your Thanksgiving dinner.

Resources to Match Those Goals:

Some guides help narrow the focus: Showing up for Racial Justice is focused on what individuals can do, now, whether they agree on politics or not. Others focus on the communicating through tricky situations; Crucial Conversations is one of the best. Livingroom Conversations is a great resource when everyone wants to come together, when you might discuss ground rules first — similarly, here’s a great list of calm questions to read right before Thanksgiving, or even this suggestion to make a game of arguing each other’s points. Or remind yourself of communication techniques that might help: you don’t ever have the right to disagree with the fact that someone is feeling threatened and vulnerable.

What are your goals for Thanksgiving conversations?