A Moment on the Math: Xenophobia or Economic Anxiety; on the failure of regressions and the disutility of averages 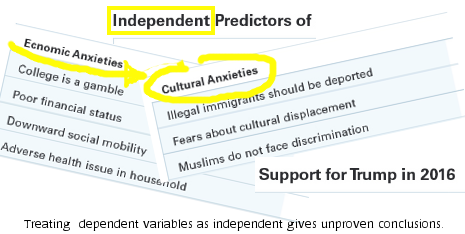 PRRI released a study showing that Trump voters were more motivated by xenophobia and racism than economic anxiety. Except it didn't. This blog aims to explain what regressions are (the statistical method used by PRRI) in a way non-math-nerds can understand and apply (hopefully often). After discouraging overuse of regressions, I'll end by discouraging overuse of averages.

A moment just on the math: the study used regressions, which separate "independent" variables.

The alternative hypothesis is that economic anxiety is the big push, driving cultural anxiety, and then both anxieties drive votes for Trump. That doesn’t let people off the hook, morally, as individuals, for allowing their minds to be clouded with racism and xenophobia etc. But if you are a politician and not a judge, blame isn’t your goal. Likely the Democrats could have won either by making sure people felt economically secure, or by helping people (for example, people in the middle of fearing for their jobs, watching their friends commit suicide and communities fall apart) walk in the shoes of strangers.

The chart at the bottom of the PRRI study says "Independent Predictors." It then lists values that are obviously not independent. Crush a person's way of life, generate enough anxiety, and many of them will close their hearts, stop walking in the shoes of strangers. This is the push down the stairs. The PRRI study finds that those who catch themselves after the push and don't fall halfway also don't fall all the way: people who feel economic anxiety but don't become insular and xenophobic don't vote for Trump.

Getting this right is important

If xenophobia and racism just exist and have nothing to do with anything but the character of one's soul, then Clinton and the Democratic establishment cannot be blamed for this election. If xenophobia is the thing a president can fix, we should take one path — any proposals here are wonderful, but this is very hard, especially for politicians to do at scale. If economic stresses are causing wide-ranging anxiety that merely includes xenophobic anxiety, then Sanders was probably right. The PRRI study doesn't help tease these sequential factors apart, though many people are pretending it does.

Averages (and back to Cognitive Politics & communications approaches)

All these studies try to average populations together. Why did people vote for Trump?

I think that caring too much tends to be misleading, or at least not useful, unless you are actually running a campaign. Saying that Trump voters voted for him because of some reason (or Clinton voters voted for her) is a way to cut off your curiosity, and make yourself a less effective communicator. Forget the averages, unless they make you more curious and help you come up with new questions to ask. Take the top half dozen theories of why people voted for Trump: probably all of them explain a few million votes. Economic anxiety, xenophobia, confusion at culture shifts, preferences for authoritarian child-rearing: you don't have to find out which theory is more right even if you could separate them; you have to find a way to communicate with people who fall in each of the categories. Successfully figure out how to reach any of these categories, and you'll landslide the next election.

Articles that pretend that falling down the stairs is caused by falling halfway down the stairs, not caused by being pushed: It Was Cultural Anxiety That Drove White, Working-Class Voters to Trump; Vox's It wasn’t the economy, but racism and xenophobia, that explains Trump’s rise.

This overall error, seeing people as groups instead of as individuals, is the one that would make you think that someone who is deplorable, as in xenophobic, sexist and/or racist, was automatically 100% deplorable and should be written off — whether you should say it out loud is a compounding error. But I know at least one person I might call mildly deplorable for their sexism and racism who still didn't vote for Trump — and this despite being called deplorable by Trump's opponent. I like math, but people are not averages. The people on the edges are often the ones that politicians and political movements can reach, if they try.